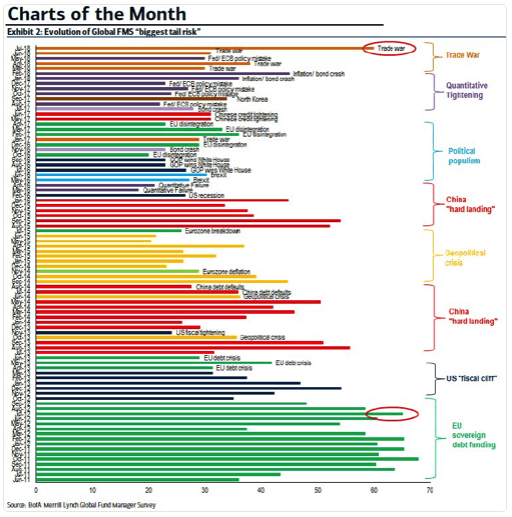 Above is an amazing chart from Bank of America Merrill Lynch showing the various bearish narratives that have evolved over the course of this long bull market. The market was undecided on a narrative last week as the major domestic equity benchmarks generated mixed performance, with large-caps outperforming small-caps and the tech-heavy Nasdaq. The busiest week of second-quarter earnings reports saw a modest pickup in trading volumes, particularly on Thursday. Industrials outperformed as trade tensions eased somewhat, and airline stocks rallied on healthy passenger volumes. Communications and media stocks suffered following a plunge in Facebook shares on Thursday, but the damage to the larger tech universe was generally contained.

Last week’s most notable event was probably Facebook’s dramatic drop. It’s not every day that you see “the largest ever loss of value in one day for a U.S.-traded company,” but Facebook, which lost as much as $151 billion of market capitalization in overnight trading after announcing disappointing growth numbers and guidance, claimed that record by ending Thursday down nearly 19 percent, wiping out more than $119 billion in value. Within that is a $15 billion hit for founder and CEO Mark Zuckerberg. The stock fell back only to levels reached in April, however, and Facebook remained the fifth most valuable company in the world.

Traders appeared to react primarily to growth in Facebook’s revenues in the quarter that was slower than some hoped for, as well as plateauing growth in daily active users in some key markets. The company also warned that rising expenses, partly to deal with privacy concerns, would reduce profit margins in the coming quarters. Facebook’s drop in market cap would have wiped out the capitalization of number of other tech companies including Texas Instruments, Broadcom and Salesforce, as well as 457 of the companies in the S&P 500 overall. That said, Facebook earnings were objectively excellent, up 32 percent year-over-year, with revenues up 42 percent (and up 11 percent quarter-over-quarter).

Amazon announced second-quarter profits of $253 billion, up from $197 million a year earlier and its first ever $2 billion quarter. This marks three straight quarters of profits above $1 billion and extends Amazon’s profitability streak across three years. Fast-growing areas including the cloud-computing business and advertising offerings raised Amazon’s profit margin to its highest in years, offsetting its lower-margin traditional retail business, which still provides the bulk of revenue. Despite the good news from Amazon, the pressure on internet and tech firms continued Friday, with Intel and Twitter also suffering large declines.

Inigo Fraser-Jenkins is the Sanford C. Bernstein & Co. analyst who put out the (in)famous note back in 2016 claiming that passive investing is “worse Than Marxism.” Last week his “greatest hits” file took on an addition when he argued that Amazon is well positioned to shake up the asset management industry. The trouble with this sort of speculation (it may be true, but there is not yet any evidence to support it) is that it’s essentially true about any industry – Amazon may get into it. But Fraser-Jenkins got a good bit of publicity, which was almost certainly the point.

Last week brought mixed news on the trade front. President Trump and European Commission President Jean-Claude Juncker turned down the heat on trade Wednesday, suggesting the U.S. and the European Union would hold off on further tariffs while they talk through their differences. The sixty-three-year-old former Prime Minister of Luxembourg craftily packaged together a number of small concessions and previously agreed upon initiatives which allowed Mr. Trump and his allies to hail the agreement as an American win. The surprise truce is the first major sign Mr. Trump is open to the sort of ambitious market-opening negotiations that his aides have talked about. The deal is still contingent on good-faith negotiations, of course, and there is no schedule set to complete the talks. Of course, critics say that Mr. Trump was taking credit for solving a problem he caused.

Conversely, tensions between China and the U.S. appeared to sharpen last week. Chinese regulators refused to grant approval to the proposed merger of U.S. semiconductor maker Qualcomm and Dutch competitor NXP, a move that many observers expect will prompt retaliation from the U.S.

Last week’s economic data remained generally favorable. On Friday, the Commerce Department reported that second-quarter gross domestic product had expanded by 4.1 percent versus a year earlier, roughly in line with expectations but very good news and the biggest jump in four years. Business inventories unexpectedly declined outright, applying a one percent drag on second-quarter growth — a liquidation that was probably an unintended consequence of surprise demand strength, particularly in consumer spending and in goods exports. Outright inventory liquidation is unusual outside of recessions, and the drawdown left inventories at very low levels relative to sales, making a return to accumulation likely.

News that Japan and other central banks might be preparing to tighten their monetary policies sent longer-term U.S. Treasury paper yields higher at the start of the week. Prices remained lower at week’s end.

European stocks had a good week, fueled by strong corporate earnings results and the good trade news. The pan-European STOXX 600 rose by nearly 0.5 percent to its highest level in more than a month. So far this earnings season, about 56 percent of STOXX 600 companies surpassed earnings-per-share estimates. The weaker euro in the second quarter has contributed to a higher proportion of companies topping sales expectations versus the first quarter. Germany’s DAX 30 notched its highest close since mid-June, reversing its fall earlier in the week that was largely due to trade worries. The UK’s blue chip FTSE 100 closed up nearly 0.5 percent too.

Worries about spreading protectionist policies led Japan and the EU to sign a broad-based, free-trade pact. The deal represents a trade zone that encompasses roughly one-third of global GDP. The deal required a series of significant concessions, which will eventually remove the 10 percent tariffs on Japanese cars and auto parts sent to the EU. It also eliminates tariffs (of 15-30 percent) on wine, cheese, and other European foods shipped to Japan. The trade pact still needs approval from both parliaments before it becomes law. At a news conference after the signing ceremony, Japanese Prime Minister Shinzo Abe said, “There are rising concerns about protectionism, but I want Japan and the EU to lead the world by bearing the flag of free trade.” Some believe that Abe’s push for the Japan/EU agreement is part of a broader effort to help avert the U.S./China trade war escalation and to insulate Japan from a possible global economic slowdown if protectionist policies escalate.

The Chinese yuan posted its seventh straight weekly loss on Friday in its longest losing streak since 2015 as the deepening trade rift with the U.S. kept downward pressure on the currency. The yuan’s drop against the dollar has accelerated since mid-June. The decline occurs as U.S. tariffs on billions of dollars of Chinese goods are set to become effective in August and coincides with a broader economic slowdown as Beijing tries to de-risk the country’s financial system. The yuan fell 1.71 percent in this year’s first half. The yuan’s weakness — which should make Chinese exports cheaper and thus more attractive in world markets — has raised speculation that Beijing is allowing the currency to weaken as a way to soften the economic blow from U.S. tariffs. Earlier in July, U.S. Treasury Secretary Steven Mnuchin told Reuters that the Trump administration would “very carefully review whether [China] has manipulated the currency.”

Finally, according to a Bank of America Merrill Lynch research note, the so-called FAANG stocks — Facebook, Amazon, Apple, Netflix and Alphabet (Google) — were single-handedly responsible for the S&P 500 being positive through the first half of 2018. Without them, the index’s first half performance would have been -0.73 percent.