U.S. stocks finished last week modestly lower in general, with the S&P 500 and the Dow marking a second week of declines as traders weighed prospects for corporate tax cuts and assessed another round of corporate earnings. The S&P 500 closed 0.1 percent lower, while the Dow declined 0.3 percent. The Nasdaq, which closed at a record high on Thursday before a bit of a sell-off on Friday, posted a 0.5 percent weekly gain. The large-cap indexes were generally flat to modestly lower for the week, while the smaller-cap benchmarks managed gains. The week was notable, however, for the S&P breaking a 50-day streak of avoiding a daily decline of greater than 0.50 percent when the index fell 0.55 percent on Wednesday. As The Wall Street Journal and others reported, this was the longest such stretch since 1965. Energy stocks were notable outliers on the downside, as oil prices reversed some of the rally that began in early October.

The week opened cautiously, as some soft data on Chinese industrial production caused a modest rotation toward safety and in the direction of the defensive utilities and consumer staples sectors, in particular. Heavily weighted General Electric fell nearly 7.2 percent on Monday after the company announced that it was halving its dividend. GE fell another 5.7 percent on Tuesday, while energy and materials stocks led the broader declines on the China data. Worries over China and a disappointing forecast for holiday earnings from retailer Target further weighed on sentiment on Wednesday.

Thursday brought a solid rebound, but most attributed it less to any specific development than a need for traders to cover short positions as well as a general move to “buy the dip.” Small-caps outperformed as traders seemed to seek out areas of the market that had lagged in recent weeks. The House passed its tax plan on Thursday. It cut the top corporate rate all the way to 20 percent, as originally promised, but traders appeared to keep at least one eye trained on the significant hurdles to tax reform that lay ahead in the Senate. The Senate Finance Committee did approve a tax bill, but it varies significantly from the House version and will need to be debated and voted upon by the full Senate in the weeks ahead.

Last week’s economic data were generally favorable. U.S. retail sales increased 0.2 percent in October, and housing starts and permits posted unexpected gains, rising 13.7 percent and 5.9 percent, respectively. The October producer price index rose 0.4 percent in October, more than anticipated. The consumer price index rose only 0.1 percent in October, but the core rate (excluding food and energy prices) rose 0.2 percent, a bit more than expected. Most analysts expect core inflation to pick up a bit in the coming months, partly because a spell of intense price reductions in communications services early in the year appears to have ended. Most also expect the Fed to raise rates again at the December 12–13 monetary policy meeting.

The modestly higher inflation data appeared to have little impact on longer-term U.S. Treasury yields, which continued to reflect subdued expectations for growth and price pressures. The yield on the benchmark 10-year U.S. Treasury note actually declined for the week. Short-term rates continue to rise at a faster rate than longer-term rates, and many analysts now expect a relatively flat yield curve by the second half of 2018.

European equities were down last week, pressured in part by disappointing corporate earnings and euro strengthening. Europe’s major indexes began the week in the red, briefly rose midweek on the back of some encouraging economic data, but then receded again by the end of the week. Traders postulated that the euro’s strength, coupled with the continuation of the “sell the winners” narrative, contributed to the underperformance, particularly in Germany and Italy. A strengthening UK pound hurt the shares of the blue chip multinationals listed on the FTSE 100, which ended the week lower. The STOXX Europe 600 Index and Germany’s commodities-heavy DAX 30 were also down.

In Asia, Japanese stocks declined for the week, ending a nine-week stretch of consecutive gains for the benchmark Nikkei 225. Chinese stocks were also lower, on the weaker IP data noted above. 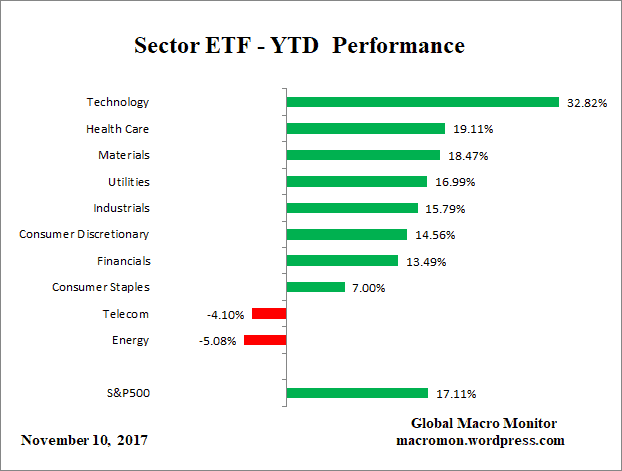 But for energy, telecom and, to a much lesser extent, consumer staples, the S&P 500 and its constituent sectors have performed brilliantly this so far year (as shown above), even if a little less brilliantly than most of the rest of the world.