Below is a list of the five *BEST* performing stocks since the start of the recovery together with their largest drawdowns during that time (in other words, *NOT* including the worst of the crisis). Over the past ten years (all annualized), PATK has earned 37.30 percent per year; JAZZ has earned 40.90 percent; MGPI has earned 35.92 percent; SNBR has earned 34.59 percent; and GTT has earned a whopping 53.66 percent. $100,000 invested in those five stocks ($20,000 each) would have turned into roughly $3 million in just ten years.

Let’s suppose that you had purchased these fantastic performers at the bottom of the market — March 9. 2009 — as described above. Now look at the drawdowns noted above on those great stocks and ask yourself, “Could I have really held on to these stocks when they declined by so much?” For almost all of us, the obvious answer is, “No!” — which goes a long way toward explaining why investing successfully is so hard.

Now on to the news, which is far less important.

The major domestic stock benchmarks were mixed last week. The large-cap Dow Jones Industrial Average and the S&P 500 outperformed and reached all-time highs, while the technology-focused Nasdaq Composite and the smaller-cap benchmarks recorded modest losses. A sharp increase in longer-term bond yields early in the week boosted financials stocks by improving bank lending margins but weighed on real estate investment trusts and utilities shares, whose relatively high dividends became less compelling in comparison. The strong performance of financials and the relatively weak performance of techs helped value stocks outperform their growth counterparts for the first week in over a month, although growth stocks remained well ahead of value stocks YTD.

The S&P 500’s biggest gainers this month include telecommunication-services and consumer-staple companies — so-called safer sectors, typically favorites when markets are volatile or declining but laggards during rallies. Many of the shares that powered indexes to highs earlier in 2018 have tumbled this month, including Apple, Amazon and Alphabet, all down at least 4 percent, and Facebook, off more than 7 percent.

Last week brought further escalation in the trade conflict between the U.S. and China, but it appeared to weigh on sentiment only briefly. Stocks fell sharply on Monday afternoon, mostly attributed to reports that the White House would soon make another tariff announcement. Indeed, after the close of trading, President Trump delivered on a threat that he made in August and declared that $200 billion worth of Chinese goods would immediately be subject to a 10 percent tariff, rising to 25 percent by the end of the year. The next round came on top of $50 billion worth of Chinese goods already subject to new tariffs this year.

In a pattern that surprised many, stocks rose solidly when trading began Tuesday and carried the momentum through much of the rest of the week. Traders may have been mollified by the low 10 percent level of the initial tariff, which some interpreted as a sign of a willingness to negotiate on the part of the administration. China seemed to offer its own olive branches, as Chinese officials indicated that they would not allow the country’s currency, the yuan, to devalue further. The yuan has declined over 8 percent versus the U.S. dollar since April, making China’s goods more competitive on world markets and largely offsetting the impact of a 10 percent tariff. Chinese officials also announced a series of measures to open China’s markets to foreign goods, such as reducing the time it takes goods to clear customs.

In reality, tariffs on Chinese goods are a tax on American producers that use them, a tax that is passed through to consumers. A buying spree by consumers and businesses looking to get ahead of the tariffs could add another distortion to an economy already revved by up a big stimulus and tax cut and already facing a tight jobs market and rising prices. However, Oxford Economics estimates that U.S. gross domestic product growth could drop by a full percentage point next year if the U.S. tops off the current $250 billion with another $267 billion in tariffs. With the economy expected to grow at a 2.4-2.8 percent pace (according to Federal Reserve and Congressional Budget Office estimates), that’s a significant drag.

Sentiment may also have received a boost last week from solid U.S. economic data. Weekly jobless claims, reported Thursday, fell to 201,000, the lowest level in half a century. Regional manufacturing indexes were also strong. Housing data were more mixed, with housing starts jumping in August but new permits falling, suggesting some weakness ahead.

The federal government ran a deficit of $214 billion in August, the fifth largest deficit for any single month in history. The CBO is suggesting a FY 2018 deficit of $800 billion, the largest annual deficit since FY 2012. Growth is accelerating because of President Trump’s tax cut but so are federal revenues. Tax receipts are at record highs, eclipsing last year’s record. But spending is also at a record. Moreover, according to the CBO, federal revenues in FY 2019 should increase by 4.6 percent but spending will be up about 8 percent.

The yield on the benchmark 10-year U.S. Treasury note touched 3.10 percent on Thursday, its highest level in four months, before falling back a bit on Friday. Most analysts believe that the Fed is all but certain to raise short-term interest rates when it meets on September 25-26.

European stocks brushed off trade tensions and Brexit woes and rode the coattails of the U.S. stock rally. The pan-European STOXX Europe 600 Index rose about 1.6 percent, lifted by financials, mining, and oil stocks. In Asia, China’s main stock indexes rallied as promises from Beijing to stimulate domestic consumption outweighed the next round of U.S. tariffs. Japanese stocks posted strong gains in a holiday-shortened trading week. 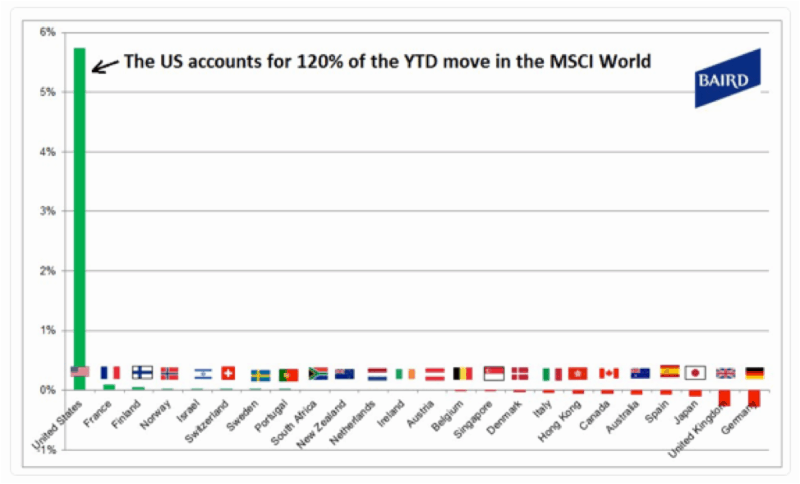